The Menopause - A Time of Change

During menopause, the female body gradually reduces the production of sex hormones. This stage of life is usually accompanied by physical and mental complaints. The intake of medicinal mushrooms can help the woman to regain a balanced balance in this phase of her life. Typical complaints can be alleviated or even completely avoided with the help of vital mushrooms.

The climacteric is colloquially known as the menopause. In a woman’s life, menopause is a time of upheaval and always the chance of a new beginning. During the menopause, the female body changes from the terrible to the infertile phase of life. The length of the menopause varies from woman to woman. As a rule, the menopause extends over a period of about ten years and is usually between the ages of 45 and 60.

During the menopause, the ovaries gradually stop producing hormones. The level of sex hormones is reduced by about 90% compared to the fertile phase. Initially, less progesterone is produced. Subsequently, oestrogen production is reduced. During this time of change, different and individually very different symptoms can occur.

While some women have hardly any symptoms during the menopause, about half suffer from moderate to severe symptoms. The most common physical complaints include hot flushes and sweating. Other symptoms that occasionally occur during menopause include mood swings, water retention and joint pain.

The menopause can also put a strain on a woman’s life on a psychological level. Menstruation is usually perceived, consciously or unconsciously, as an integral part of femininity. The absence of menstruation as a result of the menopause therefore means more than the mere loss of fertility.

Often, these various complaints are only attributed to the drop in estrogen. However, a good balance of the various sex hormones is important for a woman’s well-being. This means that not absolute values, but ratio values are decisive for well-being. In naturopathy there are good possibilities to accompany the natural change of the woman and to positively support the adaptation to the changed hormone situation.

Vital fungi have an adaptogenic effect, i.e. they have both a balancing and a regulating effect. Vital mushrooms can help the woman’s body, mind and soul to regain a balanced balance during the menopause and alleviate discomfort. In the case of mild and moderate menopausal symptoms, it is often even possible to achieve freedom from symptoms and complaints. 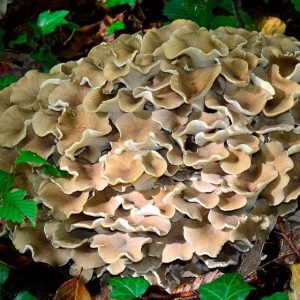 There are a number of different medicinal mushrooms with different fields of application. Reishi, which is also called the “mushroom of eternal life” in Asian medicine, helps with vegetative misregulations such as hot flushes, inner restlessness and insomnia. The polyporus can help with water retention. It acts like a natural dehydrating agent. However, unlike other dehydrating agents, its ingestion does not lead to the elimination of the valuable mineral potassium.

Since each woman’s symptoms are weighted differently, it is advisable to seek professional advice before using the vital mushrooms. Under +49 6047 37915-70 we advise you very sensitively to the topic Vitalpilze and their application.